Ripe Nursery School was founded in 1985 by Caroline Bishop, who gained a BEd. at Central School of Speech and Drama and a diploma in Nursery education at the London Montessori Centre. She went on to teach children at Mayfield College, Hatchlands School in Cuckfield and St Aubyns School in Rottingdean, and taught undergraduate teachers at Brighton Polytechnic. 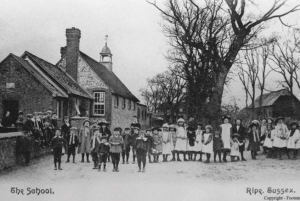 The school was started in the old Ripe School building, originally built in the 1840s as a National School when universal education reached Sussex. At its peak there were around a hundred children in the primary school, but numbers dwindled in the 1960s and by 1985 the building had become the Hayton-Baker Hall.

Ripe Nursery School started with 7 children in the first year, rising to 16 by the beginning of 1986. Caroline and Piers lived opposite in Old School Cottage, which had been built by the Church of England for the Head of the old school. 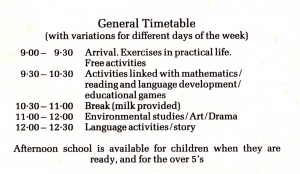 Initially known as Ripe Kindergarten the original prospectus shows that very little has changed in the ethos of the school, with a focus on learning through play and active exploration, the development of language, exploration and understanding of the environment, especially spending time outside, and creative experiment to encourage imagination and expression of thoughts and experiences. 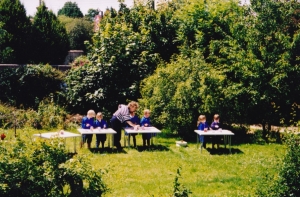 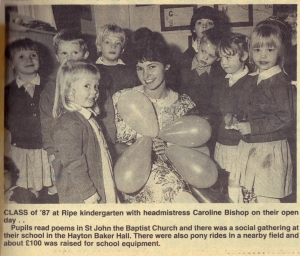 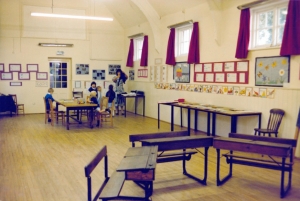 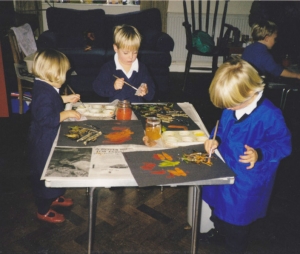 The school was open for children from two-and-a-half to seven years old, hot lunches and afternoon school was provided. For a couple of years from 1988 there were 4 classes, Nursery, Kindergarten, Remove and Form 1. Many children moved on to local schools including Laughton County Primary School, and older children who stayed on generally went to St Andrews, St Bedes and St Aubyns schools at the age of 6 or 7 years old.

In December 1987 the Bishop family, including the Bishops senior, moved to Curls Farmhouse in the centre of Ripe, and the school with 25 children moved with them in 1988.


Most families lived in the Parish of Ripe, Laughton and Chalvington but some children travelled from places as far afield as East Hoathly, Blackboys, Uckfield, Hailsham, Lewes and Heron’s Ghyll.


After many very happy years, in 1999 Caroline decided it was time for a change and for someone else to take over the reins, although she continued in education as an Ofsted inspector and continued to keep in touch and attend events at the Nursery. 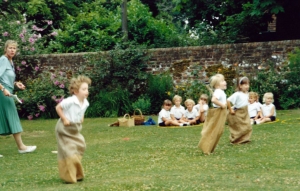 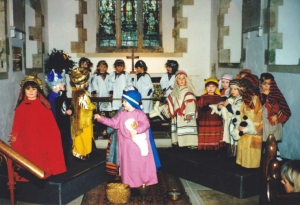 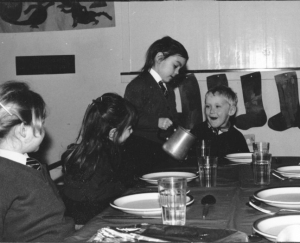 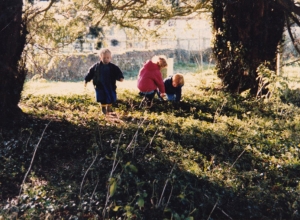 Caroline took this opportunity of getting in touch with former pupils and asking about some of their memories of the Nursery:

So in September 1999 Jo Hyne took on the Headship of Ripe Nursery School, which moved back to the village hall where it had begun. She, and now Kate, have continued with a similar commitment to the importance of early education and providing an ethos of high quality teaching and learning with sensitivity to the personality of the individual child. Caroline now works as an Early Years Improvement Consultant in East Sussex.

Jo Hyne picked up the reins – and the all important school bell, used since the Village Hall was a primary school – from Caroline at her final Sports Day in the Summer of 1999. She moved the Nursery from Caroline’s home back to the village hall in Ripe with eight children and lots of space! She started with the continued help and support of the three staff who had worked with Caroline (Miss Julie, Miss Jean and Miss Sally)

Having worked at a Montessori Nursery in London and the Haymakers in Waldron,  Jo continued with the same philosophy of quality care, education and principles. When she took the Nursery on it was open from Monday to Wednesday for the small class and to Thursday for the older children. This continued for the first two years until the numbers grew sufficiently and the doors opened for the full working week.
Jo went back to using Ripe Church for the Nativity and Harvest festival and used the field for Sports Day in the Summer (with an astounding track record of not being rained off although the children had to wear wellingtons some years!)
The numbers continued to swell year after year and although the Nursery lost Jean to retirement and Sally to St Bedes, Jo was fortunate to be joined by Miss Katherine and Miss Julie the second followed by Charlotte and Mel, all still in existence today!

The Nursery started a lunch club in 2006 which proved immensely popular and shortly after requests were made for a few afternoon sessions. The children continued to come predominantly from the local area and villages although some came from Eastbourne, Uckfield and as far as Offham.
The Nursery has always been made to feel immensely supported and welcome by the villagers of Ripe and the staff are always delighted to see ex-pupils when they come to visit. Last year they even had the joy of one who came for work experience pre GCSEs.
Three Ofsted inspections and hundreds of children later Jo and her husband Jerry saw the last of their three children leave sixth form in September 2013.
Four years ago Caroline introduced Jo to Kate, an early years teacher who was keen to set up her own Nursery. Three years later Kate made contact again for another visit and Jo knew she was the right person to take over – injecting new energy, life and youth into Ripe Nursery!

My thanks to Caroline and Jo for putting together this history of the school.